It was lovely; a gift from the universe. Then just as quickly as it began, our little owl flew up and away on silent wings. 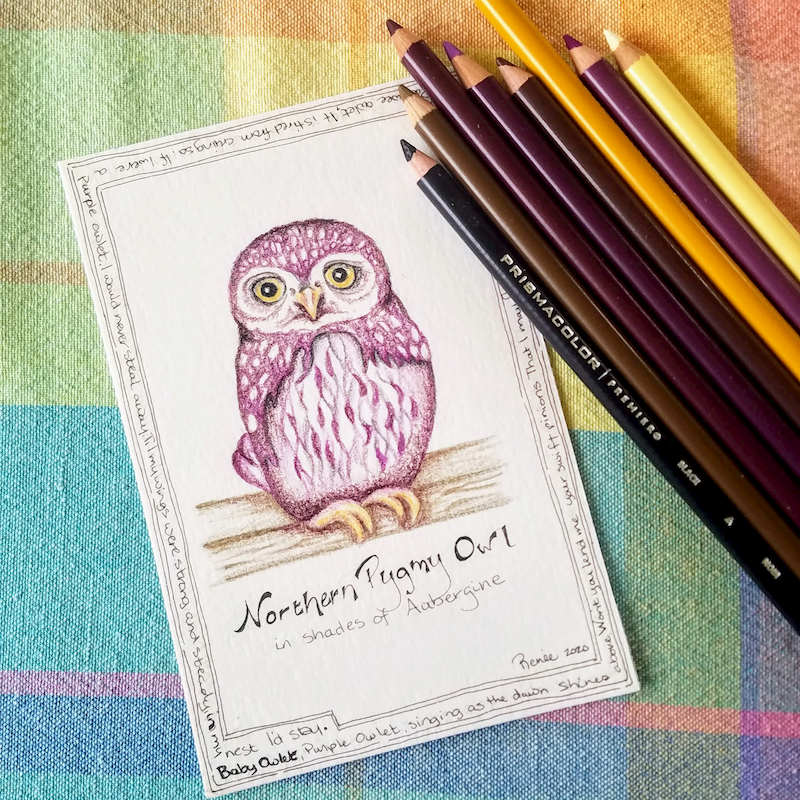 Are you familiar with the camp song Baby Owlet? If you are, you’ll know why he’s purple, too!

Z and I have known one another since our early teens, when we met at Camp Namanu on the shores of the Sandy River. Almost every year, we go to the annual camp Reunion weekend together, where we like to stay in a particular cabin that is situated on a steep hill. In order to maintain the trail on this hill so that it doesn’t become a veritable mud slide during the rainy season, steps have been cut out and reinforced with what looks to be railroad ties.

One evening, as Z and I climbed the trail to our cabin, we each – at the same exact moment – spotted an impossibly small owl sitting on the edge of the last wide step before the path diverged. It was such an unusual sight that it actually took us both a second to realize just what we were seeing.

He was a perfect little owl, maybe as tall as a coffee cup; and I’m certain he was just as startled to see us as we were to see him. A small, lifeless mouse lay beside him. For a few seconds, time stopped. Z and I stared at the little owl and the little owl stared back at us. No one moved a feather.

It was lovely; a gift from the universe. Then, just as quickly as it began, the moment was over and our little owl (for he had already become “our little owl”) flew up and away on silent wings.