I might have left Steinbeck there on the icy linoleum beside an already stone cold Hemingway, had Lennie not died.

Mural in front of the National Steinbeck Center in Salinas, California.

Were he still with among us, John Ernst Steinbeck, Jr. would have turned 118 years old today.  The acclaimed author knew by age 14 that he wanted to be a writer, and once inspired never abandoned that calling. Over the course of his career, he wrote twenty-seven books, most notably East of Eden, Of Mice & Men, and The Grapes of Wrath. His body of work earned him a Pulitzer Prize for Literature in 1962, and the admiration of hopeful young writers for generations to come – myself included.

I discovered Steinbeck at thirteen, when I became obsessed with reading The Grapes of Wrath (not for some junior high assignment, but) because something about the raw poetry of its opening lines appealed to me –

To the red country and part of the gray country of Oklahoma, the last rains came gently…

I remember rolling the line around on my tongue at least twenty times, just to feel the words.

One day as I was sprawled out on the couch reading the thick volume, my father made a passing comment that had lifelong impact on me. “Had a professor in college that wanted me to read that,” he said. “Wouldn’t do it.”

“I lived it, sis,” he said. “By the time I was your age, I’d picked cotton and beans and apples and everything there is to pick between the Texas panhandle and the Oregon coast.”

He paused and looked past me. “Told that professor I didn’t need to read about some destitute Okie family doing the same to know what poor feels like.”

In that moment, I realized that John Steinbeck could open a window to my father’s growing up years; one that had been long nailed shut. I became voracious. There weren’t enough words.

Enter a succession of worn-out high school English teachers, most of whom appreciated neither my literary precocity nor my insightful (read: smartass) remarks. Together we plodded through an endless catalog of required texts, methodically quashing the beauty and vigor out of the Classics like violets beneath an elephant’s heel. Even Steinbeck began to seem dull and listless.

In fact, I might have left Steinbeck there on the icy linoleum of Mr. See’s Freshman English class (beside an already stone cold Hemingway), had Lennie not died.

But Lennie did die, and so there I was one night all alone in my bedroom, fourteen years old, curled up in a corner crying over that sweet dead puppy and that sweet dead man-child and poor, lonely George, and falling in love with John Steinbeck all over again. Not because I loved the book: it’s not my favorite; or even for what Steinbeck could teach me about my father’s early life. No, I fell in love with Steinbeck because he made me see myself.

That night, John Steinbeck became my first writing mentor. His lessons still ring, every time I sit down to write. And every time I don’t. Steinbeck taught me that writing is real work, and talent and hope alone won’t pay the bills. He showed me how to be quiet and still, and let characters tell their own stories. He captured my wild heart with his restless words.

And this I believe: that the free, exploring mind of the individual human is the most valuable thing in the world. And this I would fight for: the freedom of the mind to take any direction it wishes, undirected. And this I must fight against: any idea, religion, or government which limits or destroys the individual. This is what I am and what I am about.

Inevitably, others literary crushes followed – Jack London, Langston Hughes, the Celtic poets, Poe, Dumas, Emerson and Thoreau – but Steinbeck was my first, and I will always love him for that. 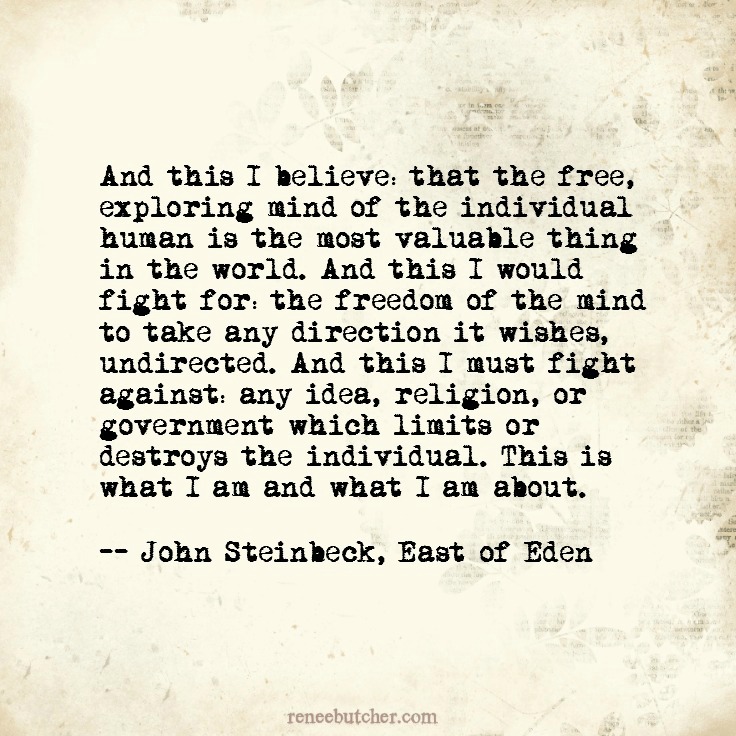 We all need a place to keep our
pretty words, and this is mine.

The Harmony Cat on Etsy